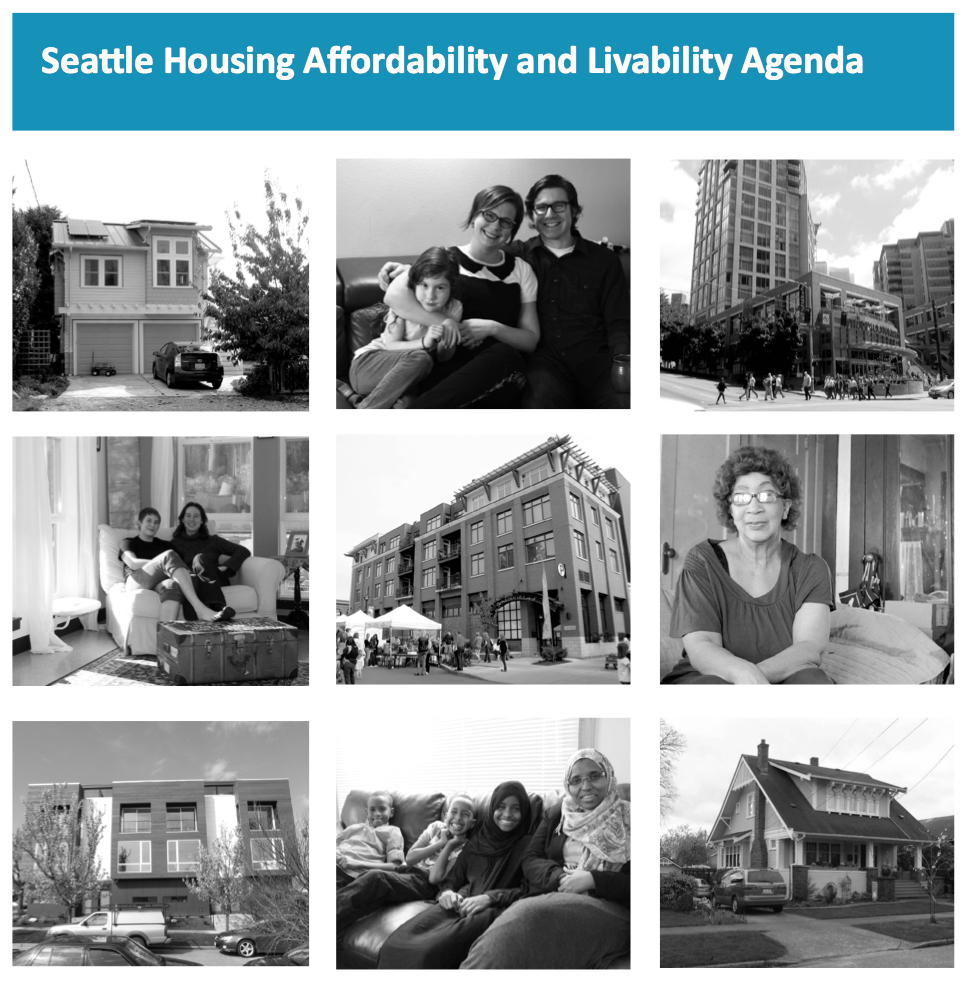 Over the last almost four years Seattle has been engaged in a deep dive into housing affordability, starting with former-Mayor Ed Murray’s appointment of twenty-eight volunteers to the Housing Affordability and Livability Agenda (HALA) Committee in September 2014, charging them to come up with an integrated approach to addressing Seattle’s housing affordability crisis. After the release of the visionary HALA Report I was one of 110 citizens chosen to participate in the HALA Focus Groups. The Focus Groups met for ten months, and provided further semi-public input on one of the major recommendations of the Report, Mandatory Housing Affordability (MHA).

In a nutshell, the idea of MHA is to incrementally upzone many of the multifamily areas in Seattle’s Urban Villages as well as a tiny percentage of single-family zoned areas within the ten-minute walkshed of Link stations or frequent buses, and then, in return for the theoretical ability of people building housing to make more money with a slightly larger building, have them either provide a percentage of new affordable units within the new buildings, or contribute to a fund used to build affordable units elsewhere, ideally in the same neighborhood. The City has taken the MHA show on the road in a two-year series of public Open Houses and opportunities for public comment. At this point MHA has already been approved for the U-District and for South Lake Union and downtown. The public is now commenting on the City-wide implementation of MHA, which will cover all of the remaining Urban Villages and Urban Centers in Seattle.

Reading through the 368-page MHA Ordinance before Council preparing my public testimony in support of MHA at the District 3 and District 7 meeting last night, I searched for the answer to a question I’ve been asking since the beginning of the MHA process: How will MHA dovetail with green building incentives?

I am not thrilled with the answer I found. Let’s take a look.

For reference, here is a chart of MHA fees, put together by Sightline Institute from City of Seattle documents.

Table A for Section 23.45.510 of the zoning code, shown below with the old FAR limits struck through, and new ones below. Note that the Floor Area Ratio (FAR) for the zones with an MHA suffix, each zone and type of building is increased from the existing zoning. For example LR1 gets an additional 0.2 FAR, or an additional 2,000 square feet of building for a 10,000 square foot parcel.  Other limits come into play though, like the density limits of one unit per 1,350 ft2 of lot area for most building types except apartments, which are one unit for every 800 ft2 of lot area, and setbacks which remain unchanged, such that all of that FAR may not be available for use on a given site. I’ll save discussions about the value of that increment and the relation to the MHA fee charged for another time. 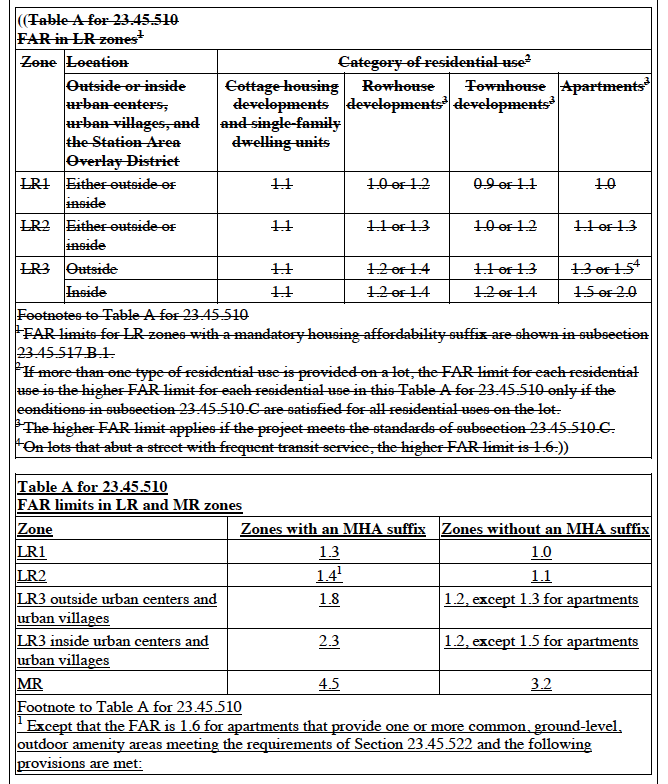 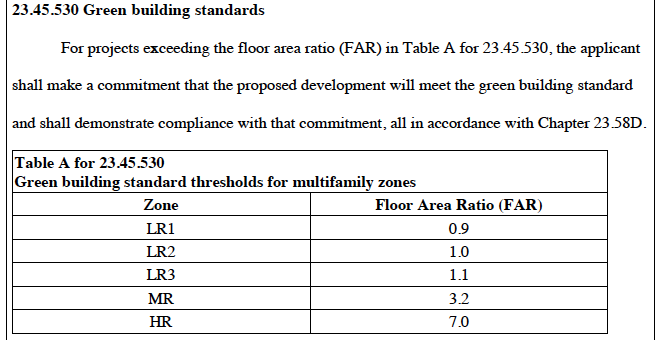 According to Directors Rule 20-2017, the green building standards a project team can choose from are:

Penalties are assessed if the project does not meet the selected certification. This is essentially a reboot of the unsuccessful Deep Green Pilot program I wrote about in 2013, with the penalties (albeit 2% rather than 5%) and without the added incentive of extra floor area and height. (The Deep Green Pilot Program has produced exactly no new deep green buildings since its inception in 2013, during one of the city’s most explosive periods of growth.) Every new multifamily building that wants to take advantage of the additional FAR offered under MHA has to participate in this program. So on the plus side, we could be seeing a lot of new deep green buildings. If that is the result I’ll be very happy.

For those who would like to use the new FAR available, the effect is to bump up the energy code for all multifamily buildings over the top of the current energy code, and to add a penalty (payable by the owner and the applicant!) of up to 2% of the value of the project for not achieving the stated goal. The core legal principle of inclusionary zoning in Washington State is equal exchange–where the ask for affordable housing is balanced by upzones equal in value to the ask. I’m afraid adding green building requirements to the mix will dampen the creation of new housing, especially when added to MHA fees/performance requirements. With this approach to encouraging green building, the proposal adds a minimum of 1% to a maximum of around 25% of the cost of construction on top of those MHA fees or performance requirements. Anyone planning a new building and on a tight budget may choose to avoid the green building requirement by designing their new building to fall below the threshold over which green building is required, so in those cases smaller buildings, and less housing, will result. The green building thresholds are close to the FAR limits currently in place, and in some cases outside Urban Villages the added square footage possible is not huge, and comes with the added cost of an additional floor with a setback. People developing buildings may not see it as worth the risk, especially for more-challenging and higher-performance approaches like Passive House and Living Building Challenge. All green building adds somewhat to construction cost and some programs add more paperwork overhead to demonstrate compliance than others. At least with the existing setup people get something back (additional height and FAR) for the trouble and expense (and ahem, making the world a better place.)

I want MHA to succeed (to make housing more affordable, and to create affordable housing…) and I want Seattle to meet its carbon neutral goals, ideally ahead of the 2050 deadline. Compared to new sprawl, infill development in already-built up urban areas all on its own reduces carbon emissions by about half. This is the reason California Representative Scott Weiner  introduced his controversial SB 827, which allows taller buildings near transit as of right, no matter what the current zoning is, overruling local control.

In the MHA Ordinance’s integration of green building I was hoping for something more carrot than stick. I was hoping there might be a provision that maybe exempted projects in the Priority Green program from Design Review, or even something like Brussel’s Exemplary Buildings program. Barring something really bold, the next best thing would be for Council to…

A few ideas for additional incentives:

There is still time for Council to improve the MHA Ordinance. If you are concerned about affordability and carbon emissions reduction, I suggest you contact Council now.

* Summaries of programs from this post on Johnston Architects blog, which jive with my experience also.