Passivhaus offers a well-proven, predictable, cost-effective way to make superbly comfortable, durable and ruggedized buildings, while at the same time reducing the heating and cooling demand of those buildings by up to seventy-five per cent (75%!) and overall energy use by up to fifty per cent (50%)! 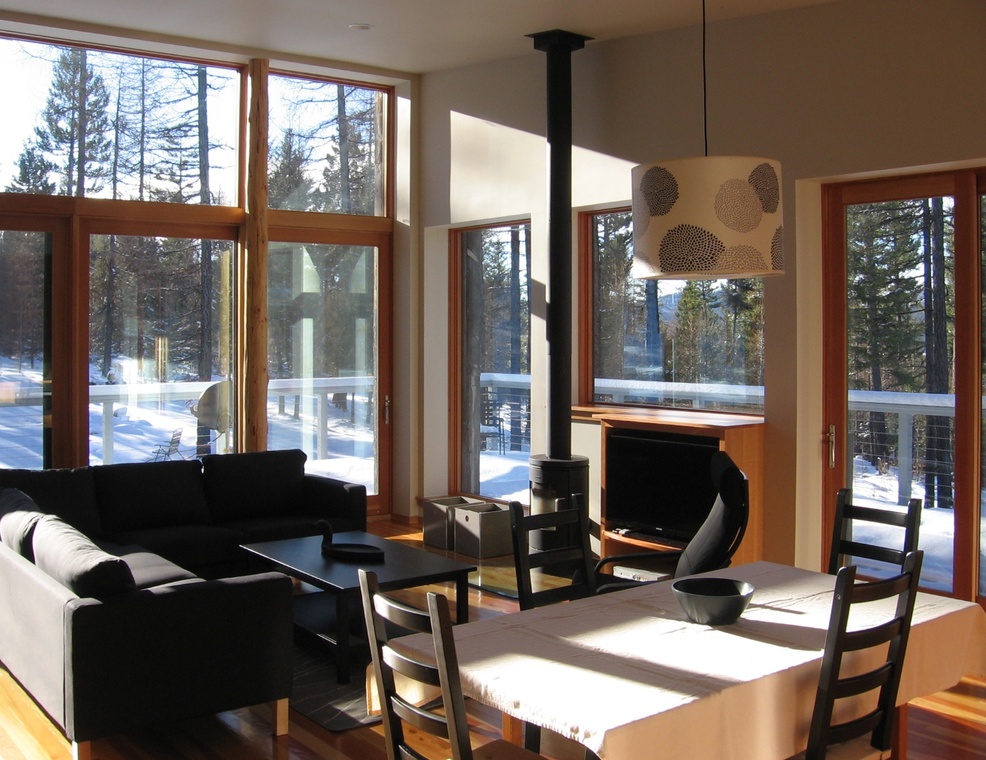 Passive House (aka Passivhaus) is a consistently objectively verifiable, cost-effective, predictable way to make a building more comfortable, more durable and healthier, with the side benefit of a huge reduction in total energy use over conventional construction! (Or, if you prefer, it’s a way of massively reducing total energy use and mitigating climate change with the side benefits of more comfort, more durability and a healthier place to live!)

You will find no hair shirts in the closets of Passive Houses! By virtue of their advanced and well-insulated design, the temperature within Passive Houses is remarkably consistent from room to room and between the inside and outside walls. There are no drafts. You can sit right next to their high-performance windows and not feel the chill of the outside. Indoor air quality is demonstrably better than in standard construction, with more fresh air. By virtue of their triple-pane windows and thicker walls (in our climate) Passive Houses are quieter than most houses. The high-performance windows and tuned-to-the-climate design mean that those windows can be large and let in plenty of natural daylight. You can of course open all those windows whenever you like! 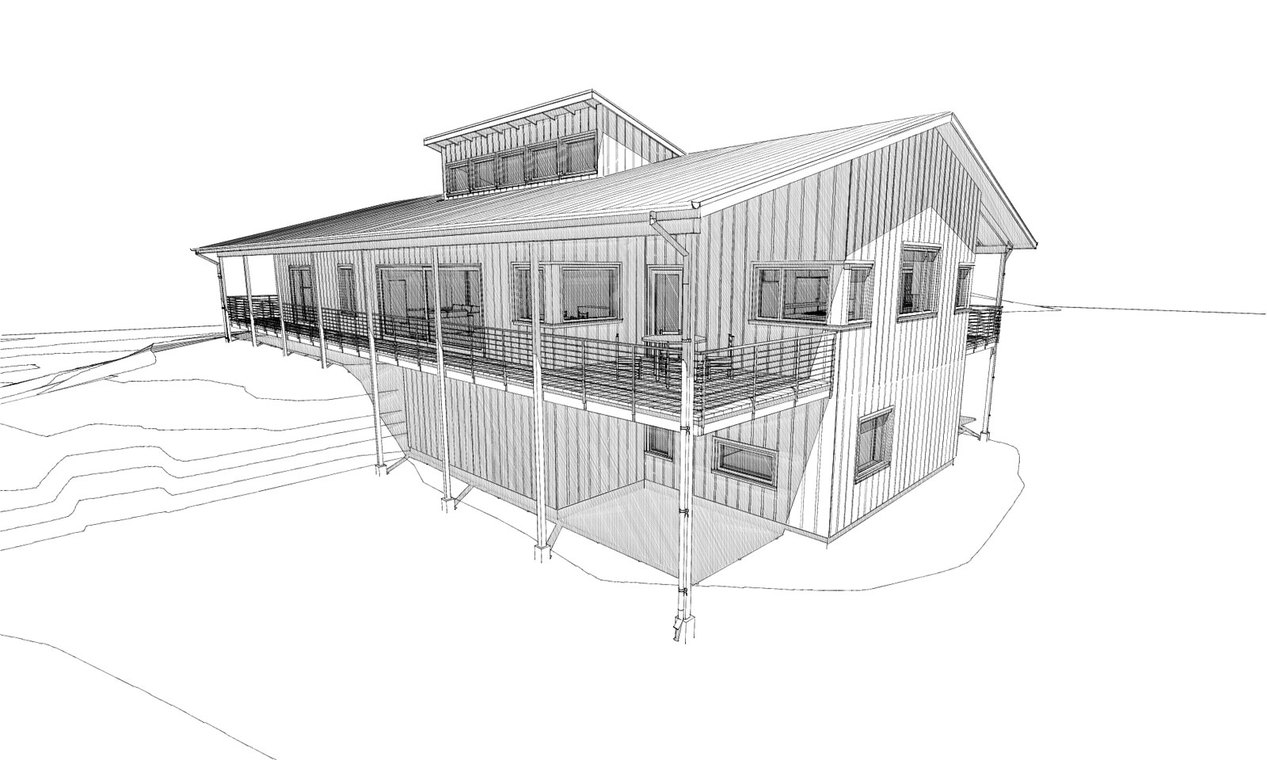 In Europe, where the Passivhaus standard has been in place and widely implemented for over twenty years, Passivhaus projects are built for the same cost as conventional construction. In the United States where Passive House is still in its infancy there can be a premium in initial capital cost for early adopters, but that premium is coming down all the time. The premium results from three factors: Higher prices on some components that aren’t yet widely available in the US (super-high-performance windows and heat recovery ventilators); higher prices from contractors unfamiliar with the technique (an “innovation tax”); and designs that aren’t optimized for Passive House as well as they could be. Here’s what’s cool: Owners can reduce or in some cases eliminate the premium by hiring architects and contractors familiar with the technique. Ballpark prices on our first Passive House design (on the right) in 2009 put the premium at 3%, 5% and 7% from three different contractors. Three years later, the additional cost for Passive House on our Multigenerational Passivhaus was less than 3%. Today Passivhaus buildings are being built all over the US for less than a 3% premium, and for a custom home, it’d likely be a wash. Even assuming a 10% premium and a very conservative 2% per year increase in energy costs, and a 20% downpayment, the investment in Passive House recoups the additional downpayment within seven or eight years and thereafter earns money for the building’s owner. That’s a 13.8% return on investment! (What stock can you buy that gets that kind of return?) Larger increases in energy costs or a smaller premium in construction cost will result in even faster payback and higher earnings. Even if you do pay some premium, remember, it is getting you higher quality construction–more comfort, more durability, and a massive reduction in heating and cooling bills and carbon emissions.

A longitudinal study of the energy use of a group of 221 Passivhaus buildings in Europe showed results that closely track their energy use as predicted by the Passive House Planning Package software. This compares quite favorably to other software energy modeling tools.

These requirements can be met through careful design of the building envelope itself (everything that touches outside air). That is, without the assistance of elaborate or expensive “active” on-site generation of power like photovoltaic panels, wind generation or micro-hydro. The building, once brought up to temperature after the completion of contruction, is, with the addition of very small amounts of heat, self-regulating and self-sustaining. (Hence “passive.”) There are two certifying bodies, with slightly different requirements, but the resulting buildings are similar. The PHIUS version adjusts the requirements for different climates in the United States. For Passive House consulting we did on an affordable senior housing project in Phoenix, Arizona for example, the heating demand requirement was lower than the PHI standard, while the cooling demand was higher.

That’s it. No checklists, no points, no stars.

Passivhaus is not “passive solar.” The term “passive” was partly a nod by Dr. Feist to the inspiration for the standard, the passive solar and super-insulated houses built in Canada and the US in the late seventies and early eighties–which though they were headed in the right direction, had significant issues with meeting their performance aspirations, as well as issues with indoor air quality and durability. While PHPP does intimately consider the relationship of the orientation, size, solar heat gain coefficient and U-value of windows to the energy use of the building, a Passivhaus building will not have large walls of south-facing glass and few windows elsewhere. You can put the windows where you want them. It will not have Trombe walls, large amounts of thermal mass such as columns of water stored in black barrels inside, or attached greenhouses with rock beds for thermal storage. It will not be earth-bermed. It certainly does not have to look like a solar house from the seventies. (Thank goodness.)

Passivhaus is not “net-zero energy.” While many Passive buildings will undoubtedly have solar panels on the roofs, and some may have windmills or other means of producing energy on-site, energy produced by those means is not required or indeed even counted toward meeting the international Passive House standard, and it can only be used to offset a small amount of energy use in the PHIUS standard in order to make meeting the Passive House standard as cost-effective as possible. Passive House, by reducing heating energy use to 10% of typical, does make it easier to achieve net-zero energy, since you are making up a much smaller proportion of energy needs with on-site generation, instead of the  larger amounts left after applying other less-ambitious means or standards of reducing energy use.

Passivhaus is not a style. A Passive House building can be any “style” its owners wish. In the United States there have been both traditional and modern Passive Houses. The rigorous energy requirements would make it challenging and more expensive to create a McMansion-style Passive House with elaborate roofs and bump-outs, but it is theoretically possible. We do think the standard lends itself superbly to Northwest Romantic Modernism.

We now have what I think is the perfect means to achieve energy intelligent buildings. We can combine that approach with all that we’ve learned about settlement ecology, resource intelligence and healthy building over the last 25+ years of designing buildings that aspire to meet the technical and poetic goals outlined in our manifesto of lyrical sustainable design. We’re going to call that “Passive House Plus” to suggest that those buildings will meet Passive House with respect to their energy use, plus conserve water and other resources intelligently and incorporate healthier materials and finishes. [Note: I coined this term before PHIUS developed it’s own Plus rating…. As I’m a big fan of the PHIUS2015+ system I’ll try to come up with a different name for what I’m talking about.] With some of our clients, “home” corresponds to our ideas of Northwest Romantic Modernism, and we are able to do that too. We know several builders who are very excited about collaborating with us and our clients on building these projects. I am excited about the possibilities of all this!

A Personal Note: How I Got Started

In early February of 2009 I attended a Northwest EcoBuilding Guild-sponsored presentation on “Passive and Net-Positive Energy Homes” at the Green Lake Library in Seattle. Katrin Klingenberg and Mike Kernagis from the Passive House Institute US (PHIUS), assisted by local architect Hayden Robinson, presented the concept of Passive House to an enthusiastic crowd. The room was packed to overflowing. People stood outside on the lawn and watched through open windows. What I heard about that day was a revelation. My practice had been exclusively green architecture for seventeen years, but I was unsatisfied with the rigor of our approach to energy intelligence. I had recently become a father, and felt an even stronger pull of responsibility toward leaving a world to my son that was as enchanting and beautiful as the one in which I had grown up. Passivhaus, I learned that day, offered a well-proven, predictable, cost-effective way to reduce a building’s energy impact on the world, while at the same time, bringing its inhabitants in closer contact with the outdoors.

That summer I took the Passive House Consultant Training–nine very full days of training over three months, with a rigorous exam (which I and my classmates spent an average of forty hours completing!) at the end. Only half of the class took the exam, and only 70% of those that took the exam passed. I was very pleased to be among the successful, and became one of the first 100 Certified Passive House Consultants in the United States. (As of this writing there are around 300.) The training was a fantastic introduction to the principles and techniques of this approach. Knowing what I know now, there are compelling reasons for considering Passive House on all of our projects going forward. It may not work for all of them, and I’m fine with that, but it’s worth looking into.