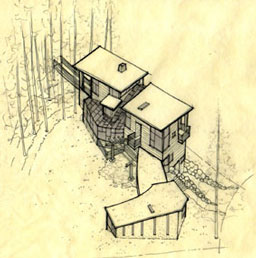 An early sketch of the Williams Home.

When it comes to architecture, style is a nebulous concept, especially for those of us trained since the advent of modernism (that is, since 1930 or so…) but we do have preferences, and we’d like to put them on the table for you. If we were left to our own devices, we’d design projects that fit this description:

A modern expression of Pacific Northwest architecture that combines the warmth and generosity of the Craftsman style, the freedom and inventiveness with form, detailing and materials of modernism, and a full complement of appropriate sustainable design strategies, built on the performance base of Passive House.

We call this “Northwest Romantic Modernism.”

What would a Northwest Romantic Modern home be like? In addition to employing the principles and techniques of lyrical sustainable design you can read about elsewhere on our site, it would have many or all of the following features:

In addition to the above stylistic and programmatic goals, our ideal Northwest Romantic Modern home could meet some other performance goals independent of the “style” we’re describing.

This will result in a >75% reduction of energy used in heating and cooling the house compared to a typical house built to the 2015 IEC. The Washington State Energy Code will pretty much catch up with Passive House by 2030. Why not build the house of the future today?

Over the course of a year, the house could produce as much energy as it consumes. (Read more. Opens a US Dept. of Energy pdf.) This is easier to achieve once energy demand is dramatically reduced using the Passivhaus approach.

We can offset carbon emissions created by the construction and operation of the house. (Read what David Suzuki has to say.) A slightly different nuance than net-zero energy.

We can return the site to pre-development metrics in hydrological terms. That is, maintain or restore the flow and cycle of water on the site to what it was before the site was developed. Strategies to achieve this could include a planted roof, rain gardens and rainwater collection, as well as appropriate siting and landscaping. Like ultra-low energy use and having solar panels on the roof, rainwater collection enhances “passive survivability,” a feature we think will become more important within the lifetime of the buildings we build today.

We like to use materials and finishes that won’t make you or the builders sick. It’s our default position. We’ve been doing it for 25+ years on every project. There’s absolutely no reason not to do it.

I believe Passive House certification is a good goal, since it is performance-based and it guarantees a high level of quality and durability of the building. In meeting the criteria above, a house would also meet or exceed a King County/Snohomish County BuiltGreen Emerald-star rating, a Build a Better Kitsap BuiltGreen three-star rating,  a LEED for Homes Platinum rating, and achieve most of the petals of the Living Building Challenge.

If you would like to have a house like this, call us immediately! We’d love to work with you.

A Note on Craftsman Bungalows

The responsive and responsible architect in Seattle is faced with an interesting dilemma. In the established inner neighborhoods, many if not most of the existing homes were built during Seattle’s second boom period, in the teens. Craftsman bungalows line the streets in Capitol Hill, Fremont, Wallingford, parts of Ballard, and the CD. Slightly later we have the Tudor neighborhoods in the Arboretum and Queen Anne, and later again the Roman brick of Wedgewood, Crown Hill and Seward Park. There are almost concentric rings of historic styles moving from the Craftsman bungalows of the inner neighborhoods through 20’s and 30’s Tudor, 50’s Roman brick ramblers, 60’s split levels and so on up to contemporary McMansions in the eastern suburbs. The neighborhoods are remarkably consistent – and the most desireable neighborhoods are the most consistent. (Leaving out Madison Park, Madrona, Leschi and Mt. Baker which are quite eclectic…)

Much of our work in Seattle has been and likely will continue to be renovations of and additions to Craftsman houses, because so much of Seattle’s housing stock takes that form. These houses, as well as the neighborhoods the houses are in, are so lovely and consistent that it seems a shame to do anything but extrapolate from the existing form and context, and compliment and enhance the existing house and neighborhood.

This sometimes, we hate to admit, leaves us wistfully daydreaming of the creative possibilities of Modernism. Now, don’t get me wrong – some of my best friends are Craftsman bungalows! I rented Victorian and Craftsman houses in Wallingford and Ballard myself (and a tiny apartment in an old brick building on Capitol Hill) before I bought a mid-century Roman-brick rambler in Mt. Baker in 2003. (Now I live in a mid-century apartment building.)

Modernism, however, in the form it most often takes–the form that we see most often represented in pages of glossy architectural magazines–is ordered, sleek and hard, and not particularly conducive to real life. Real life tends to be messy and vibrant. As the chair of my school of architecture Peter Prangnell was fond of saying, “there’s no place for Grandma’s buffet in a Mies van der Rohe house.” (Or a Frank Lloyd Wright house.) Architects who do “modern” architecture often tell their clients they have to leave their history behind. We don’t want to ask you to do that. We think that’s rude! (I will say we are experienced at designing places that allow our clients to easily put everything away, fast. Ask me about the fashion designer’s studio we did on Central Park West.)

Modernism does offer the liberating possibility of making places that suit the way we really live today–of making places that honestly reflect who we are. And the hallmarks of much good modernism–natural materials, flowing spaces, connection between indoors and out–are more difficult to achieve within the more restricted formal language of the Craftsman style. Combining Modern spatial qualities with the warmth and coziness of Craftsman elements like porches, thick walls, window seats and inglenooks sounds about right to me. If it sounds good to you too, give us a call! Let’s see what we can do together.